In the late 1990s, I was selling technology, and the company I worked for decided to start offering video conferencing. The manufacturer we carried launched a marketing campaign around a use case in a neonatal intensive care unit that enabled parents to stay connected with their babies, even when they had to return home. The company called it “The Virtual Goodnight Kiss.” The program allowed Mom and Dad to sing lullabies, read stories, and talk to their baby in order to maintain a visual connection and fully bond with them during that critical early stage of life.

About that same time I started having my own kids, and I remember the “failure to bond” topic being top of mind. Without bonding, without establishing that intimate connection, the risk was high that the baby could go on to develop low self-esteem and emotional issues, and could fail to form the ability to trust. No pressure at all for a first-time parent!

That use case was my introduction to telehealth and it really hit home. Working with technology was great, but working with technology that enabled someone to build trust and had a meaningful impact on their life … well, that was different. It was completely intoxicating. I knew then that I wanted in.

Fast-forward a couple of decades. I’m attending an unconference session at Vidyo’s Healthcare Summit in Nashville. A group of us are in a breakout session, “Patient Community Empowerment,” exploring how to best structure peer support groups for patients struggling with chronic or behavioral health issues. The person leading this session had just quit smoking, and felt he would have benefited from virtual peer support while he was working on quitting. Earlier in the summit, he’d attended a  session on integrating contact centers with telehealth, and saw a powerful opportunity to build a virtual support community leveraging Vidyo’s technology.

Some of the telehealth practitioners in the unconference group shared examples of what had worked well in their own peer support programs, and, maybe more importantly, what had not. One example was a support group for parents of kids with ADHD. The group that met in person had an 80% attendance rate, while the virtual (video) group saw only 40% participation. The administrators were able to rule out technology problems as the issue, but they concluded there was one missing element: an initial connection of trust. They realized that a line of trust might have made the virtual group more open to participating and sharing with one another.

Another telehealth practitioner told the group he was concerned about ensuring enough access points to care for patient communities. He said, “Patients can be down the street from great facilities, but they still don’t access the care.” He went on to describe certain patient communities that would go all the way across town to seek treatment. Why? Because patients want to go to the care provider they have a trusted relationship with. A number of similar examples made it clear that putting telehealth solutions in place is sometimes just the tip of the iceberg. Telehealth isn’t the end, but rather just the beginning of empowering patient communities and establishing trust between patients and caregivers.

During the general session at the unconference, we listened to Nick Adkins of #pinksocks fame describe his views on healthcare. If you’ve ever had a chance to hear Nick speak, you know that he and the pinksocks tribe are passionate about shared human connections. Nick believes we are “using technology not to disrupt but to improve. To bring the relationship back to what it should be … a shared moment in time.” I spent the drive home to St. Louis replaying the day in my head. There was a power in those conversations, and in the messages shared, and, full confession, it moved me.

By the end of my drive it had occurred to me that I was no longer in the technology business or the telehealth business. I was in the trust business, and I realized I was home. 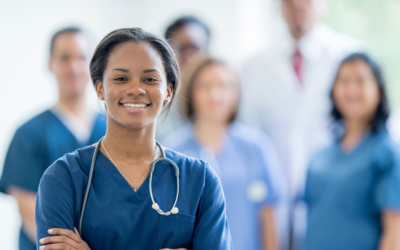